In Spirit Bonds you guide a spirit through the underworld. You have to stay connected to the Artifacts, otherwise the Spirit will vanish into the void.

The Theme of this years GMTK-jam was "Joined Together" - In our game you have to uphold the connection to the Artifacts and avoid obstacles to reach the end of each level.

Seems like a fun concept, but I wasn't really able to give it a fair go with the controls being the way they were. As other people have mentioned, the mouse made it nearly unplayable. The right stick on the controller didn't work on the web version, and the controller didn't seem to work at all on the downloaded one (though that could have been because I was playing through WINE - a Linux build would have been nice). In any case, though, the game looked and sounded very nice and I would love to play a version of it with slightly rethought controls.

Hi! Thanks for the feedback. We are really sorry for the messed up mouse-controls. The Windows-Build should work fine with a controller, but we couldn't test it on Linux of course :D

We are currently working on a fixed version, we would release after the voting phase. Maybe you want to give it another shot then :)

I like the concept but it was a bit hard to enjoy with the janky mouse UI. Feels like it was designed with joystick controls in mind. Great idea and great art!

Thanks :) If you have a controller, thats definately the best way to play it. Otherwise, we are working on a post-jam-version with improoved mouse controls :)

Great stuff! Doesnt run very well with mouse and keyboard unfortunately, the mouse controls feel like a quick second thought. Love the concept tho and the mechanics feel really fresh and original. Great job on the artwork aswell!

Nice, it is fun.
the concept is interesting, could definitely see it becoming a full game. I only played the web version which was a bit janky because of the window size.

The effects in this game look amazing. The color palette is also on point. However, sometimes it feels like it would benefit from some visual feedback when players are near the point where ties break. Other than that, interesting mechanics with cool level design

There is a visual cue, the line gets thinner till it snaps.

Though more audio cues will help. 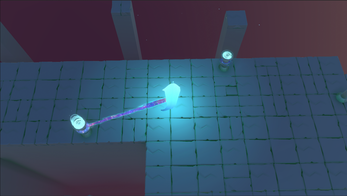 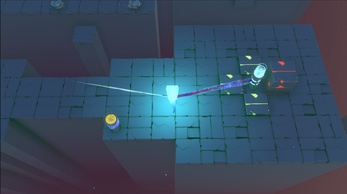